Warhammer 40,000 is at its core all about war, featuring different factions battling for supremacy. It involves the use of miniatures to engage in epic warfare.

The game comes with a powerful and complex background story, huge boards and requires playing strategically and tactically.

There are a lot of rules to this game, but we will try our best to make it as brief and simple as possible. So, by the end of this article, you will know the fundamental principles for how to play Warhammer 40k.

Dive in and let’s have fun.

To get started we recommend you get the recruit starter kit. First, it is less costly if you don’t have your own models. Second, it has two starting armies – One controls a Space Marines Lieutenant and a squad of Assault Intercessors against the second player — a Royal Warden, Warriors, and Scarabs for the Necrons It is perfect for a great two-player gaming experience.

You can buy this starter set in hobby stores or on Amazon.

The recruit edition comes with its own dice and measurement tool. 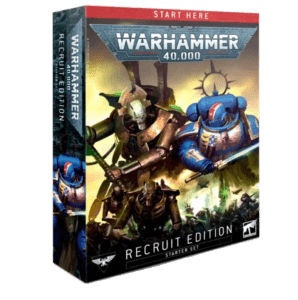 Each army in the game has its own codex. This codex contains its units, abilities, and history. For starters, the recruit edition provides you with the basic army to play the game easily. Choose any army of your choice and learn what you can about them.

Armies in this set:

There is a manual for the basic rules included in this edition. Check and learn the essential guides to miniatures and settings layout. 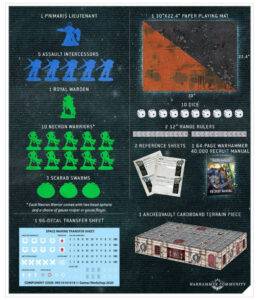 Your army codex provides you with a list of armies you can use. Make sure you make an army equal to a total point of 500 – 700. It is perfect for beginners.

However, you can also choose to buy other units as you get good with the game.

You can also use BattleScribe to create a powerful army list easily and efficiently.

After writing your armies, you also need to assemble your miniatures for gameplay.

Here are some things you might need to assemble your miniatures.

See Also  How To Play Risk - Game Rules and Strategies

This is only to help you differentiate between units. A little paint job of two to three colors can help you do the job.

You will also need other equipment to help you get started:

Choosing a mission will give you an overview of how to win the game, set your battle, and deploy your army. A mission also sets out any rules you need to help you play the game.

As a beginner, we recommend you start with easier missions.

After choosing a mission, select one of your models to become the warlord for that unit.

In this case. It is either the Primaris Lieutenant for the Space Marines or the Royal Warden for Necrons.

Remember you lose the warlord title if that unit is destroyed by the opposing force. 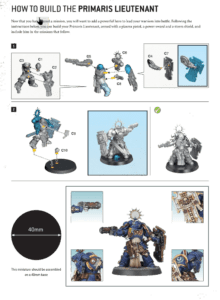 After that, set your battlefield in accordance with the number of armies you have. Use a 6×4 foot board if many armies and a 4×4 if small armies.

Also, if your set comes with a terrain, you can use that.

You can now start deploying your armies after a dice roll. Players will pick an opposite side of the board. If you are the first player, place your units first and the second player places his or hers next.

Check for unit coherency by making sure each model is within 2 inches of the other.

Also, there are rule deployment rules in your set. Check for them. 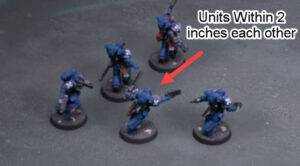 The player to deploy first makes the decision to go first or second. However, if he chooses first, the second player can change it by getting a 6 on the dice roll.

Getting victory points is usually determined by the mission chosen. Check your mission stats for more information.

Move all your units

During gameplay, you have the ability to move your units. Models within a unit move as one. The distance covered by a model can be found in the codex of the game. Check this information for every model you have. Also, you will measure distances with your tape measure.

The movement phase is composed of two steps:

Models called Psykers have the ability to use psychic powers. If you have some of these models, check for their rules in the rulebook.

Using ranged weapons your units can attack enemy units in their sight. If one model within the unit sees the enemy, all units can fire upon the enemy at the same time.

Check for the rules concerning the attack phase in the rule book.

After choosing to attack, you can now charge at the enemy and attack. Also, check using your tape measure to ensure the enemy is within 12 inches. 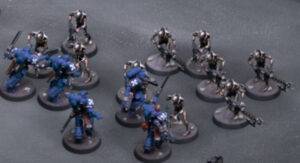 Now you have charged at the enemy and in the engagement range. This phase is where you fight for survival using brutal melee attacks.

Units within this range make attacks at each other. The charging unit fight first.

After the attack has been resolved, the opponent attacks next, choosing the next eligible unit to fight. The fight will end if there is no eligible unit left.

To attack with a unit, you go through three steps

You can send your enemies running after the fight phase. Players will check their condition to know whether they are in the condition to still be in the fight. If not, they fall back.

You can either do a morale test or a unit coherency test.

You are on your way to playing Warhammer 40K easily. Follow the steps religiously and you will be okay. Love this hobby? Check our board game page for ideas. 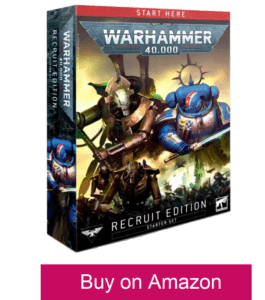